Acts 17 tells of Paul’s adventures (and misadventures) as he traveled around telling people about Jesus. Paul used to hate Christians. Some people wish they could feed Christians to lions (and yes, sometimes I understand why)… 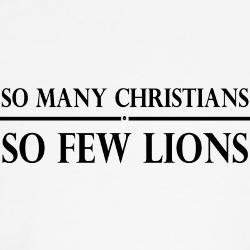 Paul shared that sentiment at one point in his life. There’s no evidence that Paul actually killed Christians, but he did throw them in jail, and certainly didn’t object to other people doing the killing. Then something wild happened and he became a Christian, but that’s another story.

As Paul traveled and spread the message, he received a myriad of responses. Some people believed, some didn’t. Some were outraged and wanted to feed Paul to lions. Some were stunned. Some were confused. Some were amused! Some were skeptical, but invited Paul to keep talking. But as I read, the thing that stuck out to me was this line:

11 Now the Berean Jews were of more noble character than those in Thessalonica, for they received the message with great eagerness and examined the Scriptures every day to see if what Paul said was true.

Paul told the Berean Jews about Jesus, and they decided to investigate the facts for themselves to see what the deal was. It says, “they received the message with great eagerness”. It doesn’t say they believed it. It says they received it. And “as a result [of checking things out for themselves], many of them believed.” (v. 12, emphasis and bracketed comments mine.)

When Andy Stanley encourages people to read the Bible, he says, “You don’t have to believe the Bible in order to read it. We read things all the time that we don’t believe.”

You don’t have to throw logic out the window in order to pursue Jesus. He invites a thorough examination of the facts.

Question I’m Pondering: When have I been tempted to dismiss something without examining it to see if it was true?

In Other News: Ever nod off in church? Just thank God you weren’t near a window.

Song of The Day: If I Only Had A Brain from The Wizard of Oz.

One thought on “You Don’t Have To Lose Your Mind Up In Here, Up In Here”